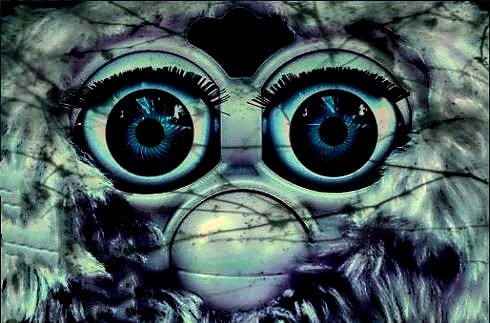 When those little Furby's from hell were set loose upon the earth my parents thought it was a grand idea to buy one for my sister and one for me. My sister and I were both very excited. We opened them and couldn't wait to start talking to them and trying to get them to talk to each other. It was great for a little while. Until mine started talking for no reason. We just assumed it was a malfunction or maybe it picked up on someone walking by. It kept getting worse though. It started talking in the middle of the night while I was sleeping and it was far away from any movement. I decided to take the batteries out of it because it was pissing me off. But that little furry would not stop! He kept talking and talking. I brought it to my parents who are no strangers to paranormal stuff. It's been around us our whole life no matter where we live. And they told me to throw it away. But first I wanted to smash it. So the whole time I'm beating the living out of this thing, it's still talking. I made my father take it out of the house and I have never been able to look at Furby's ever since then. I don't even want to be in the same room as one. I know it wasn't the Furby itself. It was something using the Furby to communicate but I still don't like them and still have a fear of them. -Kelipi