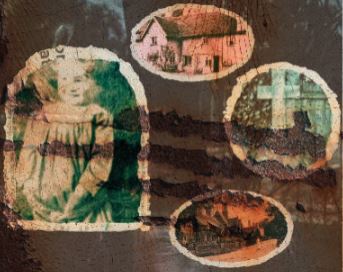 I moved from Cambridge England to a small village about 15 miles away called Waresley. Beautiful village, there was a pub, a church and plenty of woods, we had a lovely house with a beautiful garden. We lived at the bottom of the vicarage road. Near to the pub and church, where the lady in the picture is walking, we lived to her right. Anyhow, after we had been there a couple of years I was upstairs on the landing when I felt like something was behind me. So, I turned, and as I did, I saw what was a small shadow, no face but an outline of a boy. Well, I dismissed it. Maybe a couple of months later, I was talking to one of the older locals, and they said that would be Johnnie Minnie, a local boy who lived at the farm at the top of the road. So, I researched and found that in 1921 when he was 4 years old, he lost his battle after a long struggle with meningitis and sadly died. He died on the 21st of August 1921, at ten o clock on saturday night. Apparently, a flash of light and a cross appeared on his door at the same time. Whilst fighting for his life he became very emancipated and kept calling for his mum. He lived at the Vicarage Farm. Which was at the top of the hill. After his death, a woman who stayed at the farm has seen him clawing at them and calling them mummy. Well I don’t know if it was his shadow I saw that day, but I do know my house was built in the 50s and when he died it wasn’t built. All I can say is he was walking from his grave (pictured) to his home (pictured) via my house. I hope one day he can rest in peace, bless him. His grave is still there now I have stood over it. Hope you enjoyed reading my story. -Anonymous