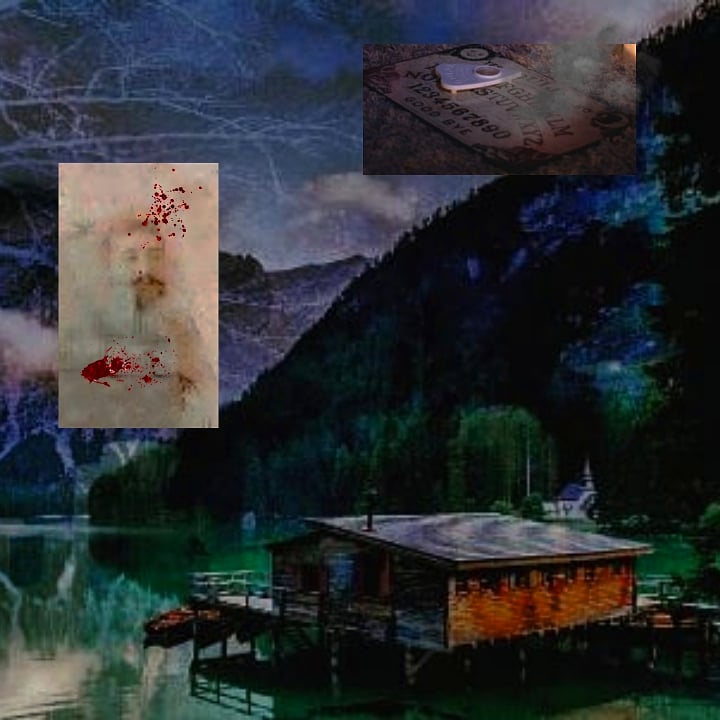 This one is long and gets creepier as you go...enjoy... This weekend was by far the creepiest weekend of my life. Nearly 3 years ago during my senior year of high school, a group of 12 of us rented a cabin for prom weekend. We went up Friday afternoon and left on the following Monday afternoon. It was a great deal and a great location, so we couldn’t pass it up. however, when I got there, it gave me a weird vibe instantly. As my 2 friends and I were the last ones there, everyone was waiting for us, so we could eat together. My ma had prepared dinner for us, so we didn’t have to cook after our long drive up there, and all I had to do was throw it in the oven for a bit. So, when I got there, I went to go put it in the oven, but it wasn’t working. Not thinking to check the circuit breaker, my friend pulled out the oven from the wall to see if it was plugged in. As he was pulling it back, I looked behind and not only was it plugged in, but there was a knife sticking straight up and down into the ground. This freaked me out but no one else as they were calling me overdramatic, which I was fine with. As the night went on, I pushed that to the back of my mind: it easily could’ve just fallen behind there when someone was cooking, and they couldn’t get it. whatever. After everyone was drunk (besides me- I’m allergic to alcohol :/), someone suggested we use a Ouija board. now I’ve had a few weird experiences with them, but I still didn’t really believe in them- it’s a board game you buy from the store, how authentic could it be? But I had one home, so I brought it. In using it the first time (5-6 of us were using it), we heard were little scratches and noises that freaked us out but didn’t bother us enough to stop playing. We were then forced to move to a different room since someone there wanted to go to bed early for whatever reason. however, the only other room that we could use was suuuuper creepy. however, we went in there anyways. we were getting REALLY freaked out: bangs below the bed, nails scratching on the floor, windows opening...but most of those were just our other friends spooking us. ha ha. the taps on the windows and cold breezes and tip toeing was real though. however, things started getting creepy. Me and this one guy there slept on the couch in the living room, and all night we heard footsteps that weren’t from our friends (super creaky floor because it’s old - no one was light enough to tip toe quietly), I saw shadows, but the creepiest part was when the front door swung wide open in the middle of the night. he kept brushing everything off: the sounds were coming from the fireplace (it was manual, meaning we needed to put wood in and light an actual fire, which we weren’t doing at 3 am), the door flying open was the wind (it was locked and there was a closed in porch between that door and the outside door) and more. I didn’t get much sleep that night. Now here is the thing that still scares me: one afternoon, we were all sitting on the screened in porch except for one of our friends who was in the kitchen. As were all goofing around and talking, I heard him yell her name. As her and I were the only ones who heard him, I told him that she was next to me. His face got immediately white and went blank. He asked how many of us were outside and I said 9 plus him, making that everyone there for that day. When asking what was wrong, his response was: “I just saw someone’s feet go up the stairs and down the hall and I thought it was our friend and I was going to ask her to grab something of mine.” the staircase was all open, so he had a clear line of vision. And the even creepier part: the owners swung by later that day to collect our money from when we went kayaking early that morning. As they were collecting everything, I asked the woman there if she had any reports of ghosts or weird things happening “just so I wasn’t crazy.” her response? “you don’t want me to tell you what happened here, do you?” Turns out, her grandfather who had built that cabin in 1925 died in the creepy room, in which my friends saw & heard a lamp move back and forth on the dresser in there later that night in the middle of the night, all night. that night I heard and saw the same things as the night before, as the next night. we have never gone back...   -Anonymous