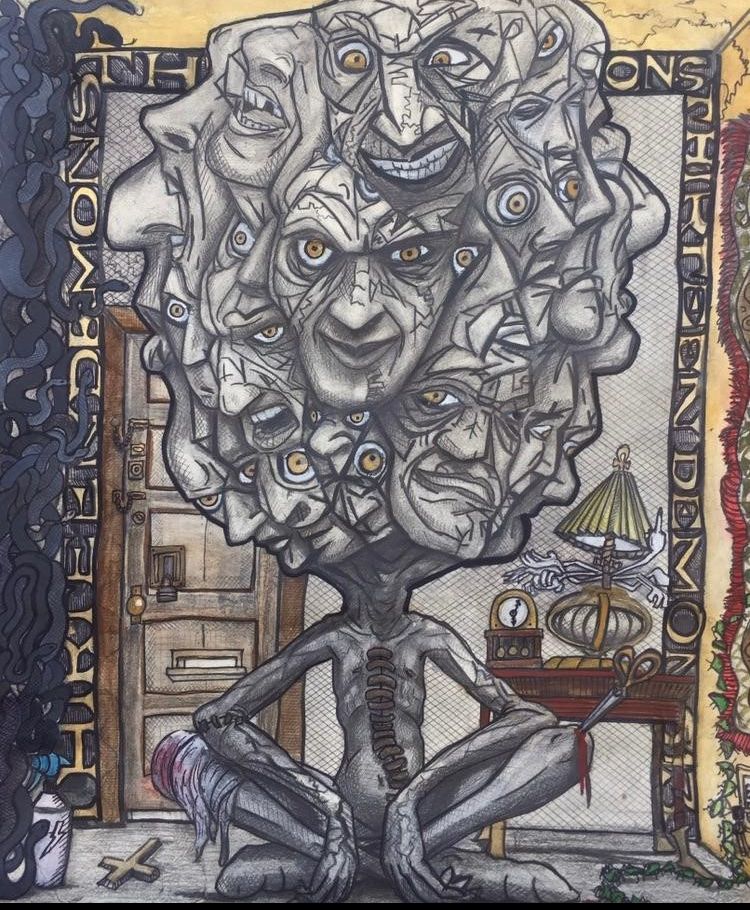 I've always been interested in the paranormal and I find the subject extremely fascinating. It's a subject I approach with a huge amount of respect. But I haven't personally had much experience with it in my life, just a couple of possible UFO sightings that were hard to explain. Even though they were memorable experiences, they were way off in the distance so it was really nothing to write home about. But I did have one experience which was quite hard to forget. It was actually a series of events that happened at a place we used to live in Germany. I was very young when it happened but I can still see the visuals like it was yesterday. In the mid-1970s, I was around five years old. My family and I lived on the US army base in Wildflecken, Germany. As a little bit of added history, this base was used during world war 2 by the German Army. During that time they kept Polish and Russian prisoners there to work in the town and farms to replace the Germans who were drafted away to war, calling it the Displaced-Persons Camp. From what I gathered the US took the base over as they advanced through during the war. They officially turned it into a US Army base in 1951. Camp Wildflecken.

Our home on the base was an apartment building that had a few units per building with a spiral staircase hallway connecting the top and bottom floors. While I was there, I remember having the usual family experiences, fond memories of the snow, the neighbor's dog, and all the camping trips we took. However, I also remember the most vivid dreams that I can still recall to this day. These dreams did not fall in the category of fond memories. In truth, they frightened me to my core.  In the house we had one of those Vintage Sacred Heart tapestry rugs of Jesus hanging on the wall, because that's what you did in the ’70s, hung rugs on the wall.  I remember Jesus' fingers being eerily thin and long and the border was lined with a row of ivy or grape leaves. To be honest, that thing always just gave me the creeps. It hung just above the couch in the living room. One evening I fell asleep on the couch, and In my dream, I woke up horrified by what I saw. I fell to the floor and scooted back as far as I could at the sight of these leaves individually marching off the picture, single file, down onto the couch and then to the floor and into the hallway. I could hear them marching as I remember a menacing yet magical feeling as if they knew I was there. It scared the hell out of me and after that, all I can remember is running past them as I bolted into my parent's room.

One of the other dreams I had, I remember being frozen with fear, as my bedroom wall right next to my bed was covered with slithering, hissing black snakes. And not like the innocent little garter snakes either, these were big black scaly "serpent" snakes. I remember them creepily moving upwards to the left in and it looked like they were in a hurry. Again it felt like they were aware of my presence but they never crawled off the wall or onto me.  However, I remember feeling helpless because I tried to call out to my parents but my voice wouldn't work at all. I think that was the most frightening part. Eventually, I was able to yell out for them, and my dad came in to try to make them disappear. but that's all I remember.

Another dream I had was also in my bedroom but there were no snakes this time. It was late at night after everyone had gone to bed, all the lights were out and I remember a voice calling my name while I was sleeping. I woke up not knowing where the voice was coming from, so I turned around and sat up at the foot of my bed only to see it coming from a little rubber toy I had often played with. That was weird enough in its own right, but stranger still, It was hanging on the cross I had above my headboard. It was one of those bendy toys that had the wire inside so you can bend the arms and legs. It wasn't a menacing toy by any means but it was in fact, talking to me. It almost seemed to glow while doing so. I don't really remember what it said but I remember hearing my name, and I don't recall being afraid of the voice at the time. It seems like it was giving me some kind of advice or instructions but again, i don't recall a single word of it.

The last dream I had during this time was of me flying down the spiral staircase into the neighbor's apartment as I was floating along with my arms spread out like a bird. I remember seeing daylight in the staircase while I was there. For some reason that just sticks with me. This dream was very lucid as well, as I knew I was dreaming and I could control my flight. I remember seeing my neighbors in their house and I remember them noticing me. Then again it might not have been the neighbors that noticed me. It might’ve been another presence there with them. I had that particular experience only a few more times in my childhood but it went away when I got older. It reminded me of the out of body experience the kid had in the movie "Insidious"

It was always something in my life that I never had answers to. I couldn't understand why I remembered those dreams so vividly. What did they mean? Why did I remember those dreams more vividly than all the other dreams I've had in my life? It was years later that I finally had a revelation as to why they were so memorable.  When I was around twenty years old I mentioned them to my mother while I was visiting her in hopes that she could shed some light on them. She patiently heard everything I had to say and then replied, “Chris, those were not dreams.” She then explained to me that for three days, I had terrible hallucinations that not only scared me but scared the hell out of them as well. My dad used a spray bottle on the wall to take care of my imaginary snakes. It was so bad they eventually took me to the doctor to look for answers. The doctors were convinced that I had gotten into some cleaning supplies under the kitchen sink but when they ran the tests nothing came up. They ended up diagnosing me with delirium tremens which is something that severe alcoholics experience during detox. I can say with certainty, at 5 years old, I was not an alcoholic. After hearing all this from my mother, it definitely sent a cold chill down my spine and definitely answered why it was so memorable, however, the question of what it all meant, and why all this happened to me has yet to be answered, It's something I have never forgotten.

I’ve never really had any more ghost or paranormal experiences since then.  And that’s fine by me. I’m not sure that I would ever do any paranormal investigating because quite honestly I believe you run the risk of inviting dark sinister forces into your life that you may not want there. I've done plenty of research on all sorts of phenomena and I take a special interest in the hat man, the old hag, black-eyed children, and shadow people. Anything paranormal sparks my interest, Residual hauntings, etc. However, I would prefer to keep my distance and view from afar if I can help it.

A few years ago I made this drawing to symbolize those events in Germany entitled “13 Demons” The name has no significant meaning other than I thought it sounded cool.