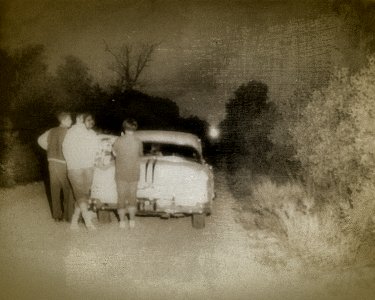 Or "spook light" as it's given locally. Lived within a couple of miles of it. Mysterious Universe has a good account ("The Missouri Spook Light") which perhaps could have mentioned the explanation of many -- the effect of a low-lying miasma -- gases rising from the ground, distorting perspectives, the light itself a distant reflection of cars' headlamps on the nearby interstate. Should have -- but that's not it. I'd put that chance at next-to-last in probability, right before "spirits of two Native American lovers whose romance met unhappy ends." But anyway, I saw it years before I lived right by it -- at which later time I never tried to see the Hornet Spook Light (its local name; Hornet itself is almost a ghost town) again -- not because of fear, but because, well, you've seen it once, it was amazing, and why test fate and risk not seeing it. You're already batting a spooky 1.000. It was around Christmas, and cold in the Four States (the Spook Light dwells within a mile or two of three of them); the ground wore a white contour of frozen snow like face powder on a fresh corpse. Bleak midwinter. And there were we three: my companions looked, respectively, like Bette Midler and a local shopkeeper later suspected of being Albuquerque's West Mesa Killer -- like, I say; it wasn't Bette and Ron. We parked up the hill a bit, unsure of where to look, and attempted to see something, as one does. It was very dark. Despair set in with the half hour, so we drove down to the intersection and found that the Spook Light Museum -- we saw it when we first arrived -- was now open. It was a pleasant dark place and "Spooky," its owner, was very proud of his new wood-burning stove. "Keeps it toasty," he beamed. "It'll run you out of here." He showed us aging clippings from back before the interstate was built, accounts of the Spook Light, to pooh-pooh that notion. We sipped our hot chocolates. Then we all stepped back outside. "Oh, you'll see it I bet," he said, matter-of-factly. "Comes most nights." So there we stood, at the intersection in the cold, and waited. The earth was grey. Within a few minutes we saw a light bobbing down the road, a pin-prick at first, then larger, more extensive. It was mesmerizing. When it reached the intersection, a bit to the near side of the road, it stopped and hung there for a moment, a yellow-orange orb the size of a basketball -- maybe a bit bigger. We faced off with it -- me, Spooky, Bette, Ron, and Spook Light. All very real. It glowed. And in perhaps three seconds it blinked out. They're -- gone. We blinked. Spooky chuckled. "Does it most nights," he said. We said our goodbyes. You tell me. -Southeast Kansan